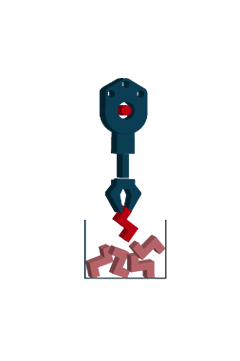 Combine the CAD file of the part with a set of 3D measurements taken on the work scene including the parts to be picked and the environment (container or other). Comparing the digitized virtual point cloud with the part’s CAD model allows to locate the parts in the work scene, and the patented eyesberg3D software ensures that the parts are picked by a collision-free system. The robot receives in real time the position of the part to pick and completely empties the container piece by piece 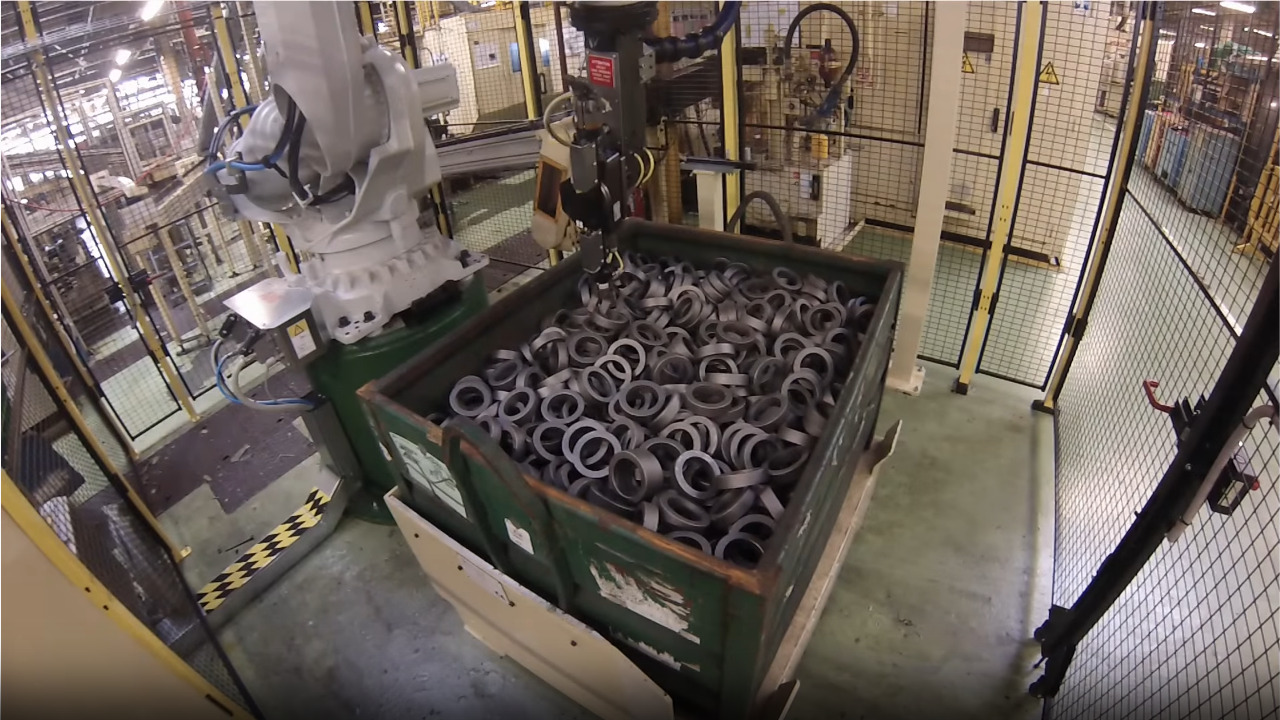 The choice of the 3D sensor is crucial for the global architecture of the Bin-Picking cell: no matter how good the processing software is, a 3D sensor providing a bad point cloud will affect its performance. Several 3D sensor models exist for the acquisition of a point cloud. Each of these sensors is based on different physical principles which depend on the use case to be considered.

This is the most common situation. The fixed optical sensor, mounted on a frame, scans one or even two bins placed under it.

Situation with a short cycle time:

In this example, the robot is equipped with a double gripper. With a single scan, it grasps two parts widely spaced in the box. During the drop-off phase, the sensor launches a new scan (performed in hidden time). This results in a significant reduction of the cycle time.

In this case, the sensor is mounted on the robot arm.

Several reasons can justify this implementation:

The cirrus3D digitizes the actual work scene as a 3D point cloud.

The eyesberg3D software locates the best part to pick from these 3D measurements compared to the CAD model of the part. In order to guarantee the picking, the possible areas of overlap by the other parts are simulated by building a virtual work scene. The software also manages the calculation of the robot trajectory to avoid any collision with the work environment.

The robot receives the position (3 components in translation) and the orientation (3 components in rotation) of the part to be picked, as well as a “possible” picking choice among the different picking strategies that the technology Eyesberg® allows you to teach to the robot beforehand. Then the robot is programmed to choose among them according to its own constraints (accessibility, singularities …) and to pick the most accessible part

the sensor is managing the robot path planning inside the bin for bin picking. The robot program development and integration is easier, and the cost reduced. Moreover, a free collision trajectory is sent to the robot ( avoiding the bin and the environment) which allows the robot to enter in the bin. A simplified integration, shorter associated to a highest productivity: a quick ROI